ORGANIZATIONAL LEADERSHIP
AND BOARD MEMBERSHIP 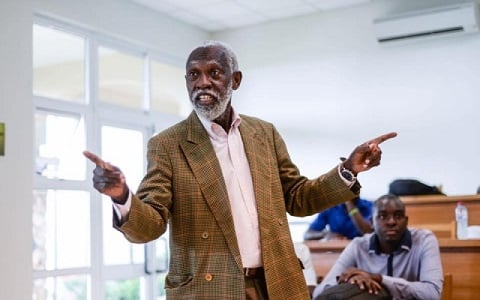 I Have Never Sought For Any Position

I think for me understanding leadership has helped me very much. To be honest with you I have never actively sought a position. I went for an interview at Ghana Investment Promotion Centre and Donkor Fordjour accepted me there. I saw an advert in The Economist and applied to the Commonwealth Secretariat. It was the same way for the UN, and GIMPA. Even for GIMPA, it was worst because I did not ask for it. It was a friend who saw the advertisement and made this statement, “you are coming home, can’t you come and help us in this way.” It is what you do in a given position that makes you a leader after you have gotten that position.

The Scripture Union is one of the most satisfying things I have been involved in and I have been blessed by that. Ghana Christian International High School is one of things I love most. Family Life Mission is another one. Then of course several church involvements.

What are most important to me are not what people associate me with, but of course, the world decides which one is important. For example, during my nine (9) years at GIMPA of course that is everything. But I believe that during the nine years, establishing the Ghana Christian International School by using our little resources which we got from the UN as a not for profit school was more important to me than GIMPA. If I want to put them on a scale of one to ten, I will put that one at nine and GIMPA will be four. That to me was very important in my life, going according to mine rather than other people’s agenda. It does not mean I did not do GIMPA well.

First of all, I want a topic on leadership within a Christian organization and Christianity. Even at the university when I was a student I was a hall president of the Campus Christian Fellowship at the University of Ghana, in my final year. We were involved in the leadership of the Methodist and Presbyterian Union on campus. We were really doing a lot of work, visiting the secondary schools and providing leadership within the greater Accra Scripture Union groups. For me this was very important in our formative years. Even when I finished and went to do my masters at Glasgow, I was a youth leader at the Baptist church at the center of Glasgow. When I came back home to work for many years, for five years I was the General Secretary for the Ministry Christian Fellowship. Then I became a Council Member of the Scripture Union for many years. During that time, I was the editor of the Daily guide for five years. I think I was the editor from 1981 to 1986.

I went on to work for the commonwealth from 1986 to 1989. I become a deacon at Edmonton Baptist church when we were in the States, 1989 to 1995. I was first a deacon, then an elder and then eventually chairman of Teenic Evangelical Free Church which is Baptist. If you are the chairman it is more or less like the CEO of the church. You chair the appointment of the pastor and everything else. From there we went to Namibia, and joined the Methodist Church there and became a leader. Prior to that when we came from Australia, 1981 to 1985 I was an elder of Abeka Presby Church. Again when we came to GIMPA, we joined the Accra Ridge Church for some time and eventually became a member of the Council for two years but I felt I should not seek renewal because I knew I was going to move out soon. Now I am at PIWC-Atomic serving as a Freelancer.

Leadership Is Not A Position

President Mills has the position of president. Then there is a leadership responsibility of motivating Ghanaians towards a vision, breaking the achievement of the constraint of the vision. Most of the time, this is the challenge. Many people have positions but they do not have leadership qualities and capacities and everybody gets frustrated as a result.

So for example, all throughout until I finished training college, almost every school I went I was either a Class Prefect or School Prefect. That was excising leadership. I do not hold any position when it comes to family and marriage but by God’s grace, my wife and I have exercised leadership in these areas far more than people think we have done. Often times in every church, I am the Deacon, Chairman or Leader. I have been in Methodist, Baptist, Evangelical Free Church and Presbyterian Church. Where ever we have been, we have not asked for but we have been entrusted with leadership roles. For me, that is the most important in terms of leadership. And real leader does not require a title to exercise leadership. It’s a matter of being in a position and working with others towards achieving some goals.

Founders and directors of Family Life Missions of Ghana.

My wife and I were actually the Founders and first directors of Family Life Missions of Ghana. Most of the evangelical family counseling going on, we actually started it. I’ve just read through Rev. Korsah’s  marriage counseling materials for the Church of Pentecost, I could see about one third of them being our materials which we have given to the Family Life Mission. Ten years ago, my wife and I formed the Ghana Christian International High School, a non for profit Christian Secondary School which now has about 320 students. It is doing extremely well and there is joy in seeing young people coming up to know the Lord. For me this is where leadership matters most.

What is unique about Ghana Christian International High School is their motto; For God, Family and Country. It is dedicated to raising Christian leaders of the next generation, raising people to be the leaders of their generation.So it is thoroughly Christian, everyone coming there has to sign that you will abide by Christian principles. Few Muslims have sent their children there but they sign that their children will go to church and we will teach them all a Christian needs to be born again.

Board member of zoomlion

I was invited to be the board chairman of Zoomlion just two months ago. One of the biggest challenges probably is because it is the fastest growing company in the country. And this causes a lot of troubles and challenges. It has gotten a great CEO, a visionary and it is a privilege to be supporting them.

Again on Chartered Institute of Marketing Ghana, I am actually one of the oldest marketers in Ghana. I have used marketing wherever I have been, but I have not practiced working as a marketing officer. But when I came to GIMPA, I was approached by the executives if I was willing to become their president. This was quite unusual. I have a policy why I serve on my boards. If you can just by your own ideal help others to do their work which a board allows you to do and not you yourself doing it, you don’t lose anything. I think we achieved quite a lot during my term as the CIMG president from the bottom to the top. Especially our annual awards became the annual award in this country. Even in terms of money, the turnover increased almost ten folds. It was good. But we had a good chief executive officer.

Last year the Minister of Finance and Economic Planning invited me to become a member of their advisory board. The advisory board just meets once in a quarter. They present their budget preparations or revenue collection, I give them my opinion but I do not actively get involved in the running of the economy but it is almost like you meet about two hours every quarter to hear what they are doing and comment on their activities.

Every board has the same functions; you are involved in policies, strategic direction of the company, you are involved in recruitment and monitory of performance of the key leadership, you are there to ensure risk management and also meeting their statutory requirements and ultimately to work towards increasing the value of share holders. So for me, it is generic. It only differs from organization to organization; it is how you actually apply it. The board does not manage the place. The board is just to give strategic direction and make sure that things are done properly. So I am not responsible for running Zoomlion. So if you come to me and say “can Zoomlion help us?” I will say “it is not my business, go to the Managing Director and CEO of Zoomlion.” That is their job. It is not mine. If they think it is a strategic issue, they will bring it to the board or if we think it is strategic and they have not brought it, we will ask for it. The duration of a board member is two or three years.

I was a president for Red Cross for two years from 2007 to 2009. Again I was invited. I think my motive was helping people in disaster, with natural and manmade disasters. Coming in to help in time of need was worth it.

My view as a board member

For me, these board memberships are basically means of sharing some of your experiences when you are no longer active because that is one of the ways you can really use to help other people.

Ghana don’t pay much for board membership.

By virtues of your experience, with thirty minutes of your time, you share what they will take three years to learn. Unfortunately in Ghana, they don’t pay much for board membership. Elsewhere, if you serve on about five (5) boards, you should get the same allowance as that of a chief executive or almost. You live on it and spend your time really studying. But I enjoyed serving on boards. I see it as a mentorship program for younger executives. You can sit back and look at other peoples work and comment on it and advice as and when you can. Just that some times, if you don’t have good executives, then you end up running the show, especially when they think that you can, which I hate doing. And especially in a system or culture were hiring and firing is not part of them, then there is too much demand on you.